With another successful competition year, the 2017 presentation of awards evening on the 10th November attracted over 300 farmers, industry and sponsors. 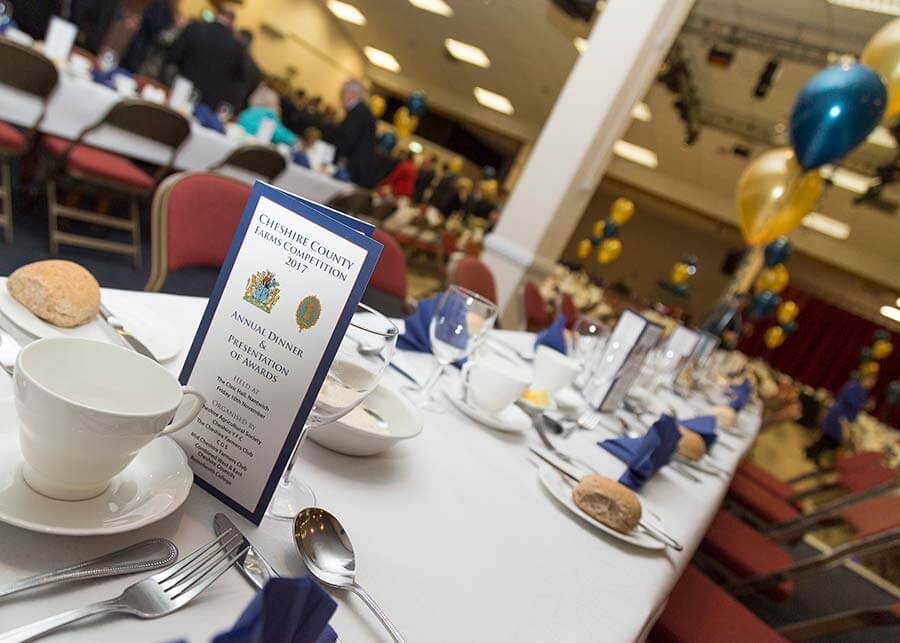 Cheshire County Farms Competition Chairman Graham Lea thanked and acknowledged all entries and commented on the increase in class entries and new faces to the competition which included entries sponsors and committee members.

The evening was a celebration and congratulation to all competitors and winners of the Supreme Champion Farm Trophy awarded to TJ and SL Mansell from Tilstone Bank farm, Fearnall, Tarporley.

Following the toasts and awards meal, Master of Ceremonies Mr John Walton welcomed Supreme judge Professor John Wibberley to give a speech before welcoming the prize winners to the stage to receive their awards.

Professor John Wibberley started the evening thanking the farms judged in the Supreme Farm Class ‘The wholly helpful welcome, provision of information and interaction on all five farms is gladly acknowledged, together with the courteous stewarding and patient chauffeuring of Chairman Graham Lea’. He continued ‘Each of the five Class-winner farms brought its distinctive strengths to the competition so that while both a clear Champion and Reserve Champion were positively selected on this occasion, all three runners-up have the potential to win in future. Alphabetically: Cooksons won in 1985 and after succession is settled have a diverse business poised to win again; Fittons are exemplary for enthusiastic communication, labour-saving and appropriate innovations; while Pace’s who won in 1993 have an admirable poultry operation and sound succession planning in place’.

Some 420 acres are held in a three-generation tenancy inherited from Sarah’s father and owned by The Wellcome Foundation. The farm was previously owned by Leverhulme. 112 cares are tenanted in an off-lying block where alternating crops of forage maize (currently cv Agirax) and of whole-crop spring triticale (currently cv Dublet) on its two halves. The principal enterprise is the 220-cow all-year-round calving Holstein herd selling its milk via Tesco Sustainable Dairy Group, and within its top 5% of suppliers. Yields are 8167 litres per cow with 50% of it coming from forages, and concentrates at 0.27 kg/l. MOPF is on a rolling average of 23.18 ppl. Cell counts are low (c.111). Replacement rate is 25% and Genus sexed semen is being used with success (i.e. well over 93% females). A proportion of the herd is put to a South Devon bull, and some heifers to a Hereford stock bull. Good first-cut silage has been made of high DM (36%) yet high D value (76%), high CP and ME, and consequently very high production potential. Lucerne is being grown with success. The farm has good access roads/tracks within it and gallops open to the public – but currently charged at only £10 per day with around 50 users per month, so below potential. Buildings are well-maintained by the landlord but used in a very orderly and hygienic way by the tenant. Management records and livestock husbandry are exemplary. Worthy Champions!

Cheshire County farms Competition would like to once again thank all sponsors, judges and competitors for supporting and taking part in the competition and look forward to 2018 competition.